Roald Dahl's The Witches (also known simply as The Witches) is a fantasy comedy film directed by Robert Zemeckis, and written by Zemeckis, Guillermo del Toro and Kenya Barris. It is based on the 1983 novel of the same name by Roald Dahl, and is the second feature-length adaptation of the novel, following the 1990 film of the same name. The film stars Anne Hathaway, Octavia Spencer, Stanley Tucci, Chris Rock, and Jahzir Kadeem Bruno.

The Witches was originally scheduled for a theatrical release, but was removed from the release calendar due to the COVID-19 pandemic. It was later announced that it would release in theaters internationally, and stream on HBO Max in the United States on October 22, 2020. It was later revealed that The Witches would not premiere in cinemas in the United Kingdom. Instead, it will be available on numerous streaming services from October 26, 2020.

In Robert Zemeckis’ re-imagining of the classic Roald Dahl story, an orphaned boy (Jahzir Bruno) comes to live with his Grandma (Octavia Spencer) in Demopolis, Alabama in 1967. The boy and his grandmother come across some deceptively glamorous but thoroughly diabolical Witches, so Grandma wisely whisks our young hero away to an opulent seaside resort. Regrettably, they arrive at precisely the same time that the Grand High Witch (Anne Hathaway) has gathered her fellow Witches from around the globe to carry out her nefarious plans to rid the world of children.[1]

The narrator begins to tell his story about his experiences of witches when he was a young boy in Chicago. The narrator reveals the story behind the death of his parents at only eight years old during a snowy period in Chicago. As a result, the narrator fell under the guardianship of his grandmother in Demopolis. The narrator’s grandmother places him in his mother’s childhood room, and leaves to make hot chocolate whilst the boy unpacks his things and becomes acquainted with his new home. Life is tough initially for the narrator, and he is unwilling to eat or socialise with other children.

The following day, the Narrator and his grandmother return lettuce leaves to the local shop. Grandmother is angry that they are past their sell by date, however the shopkeeper explains that they are fresh and were recently brought into the store; nonetheless, Agatha Hansen asks for fresh leaves, to which the keeper obliges. The Narrator asks his grandmother if he can purchase some nails to build Daisy a little house, to which Agatha Hansen accepts, citing that he must buy the correct nails if he wishes to stop them from rusting. Whilst looking for the nails, however, the Narrator is approached by a woman — clearly a witch — who offers him a sweet. The narrator becomes fascinated by the snake curling around the woman’s arm, but is forced to leave the store in a hurry when his grandmother calls after him. Agatha Hansen begins suffering from a cough every time the woman is around, and she becomes aware that something is amiss.

When they arrive back home, the Narrator explains what he saw in the store, but his grandmother already has an inclination as to what it was, and begins asking questions. She eventually reveals that the boy saw a witch. Agatha Hansen tells the Narrator a story about her time as a child, and her experience of her childhood friend, Alice, being turned into a chicken by a witch after taking sweets from the woman. Grandmother tells the Narrator that they must leave immediately, remarking that they will go to stay at a hotel. When the Narrator questions how they are sure they can be safe there, she remarks that witches only pray on the poor; this hotel, however, is full of wealthy white people.

Just as Charlie and his grandmother head upstairs, a group of women — clearly a coven of witches — enter the hotel. Among them is the woman Charlie had previously seen at the store. Whilst Mr. Stringer tells the leader of the group that the cat isn’t welcome, the group protests, questioning what the process surrounding mice being at the hotel would be.

Later that night, Charlie’s grandmother explains the features of a witch to him, including how to spot one. Namely, they have claws instead of hands; they have no hair; large nostrils to sniff out children, and their mouths arch at the corners, which is often hidden by makeup. She later explains that each time they are in the vicinity of a witch, she develops a cough. Whilst the two sleep, the black cat previously seen with the group of women is seen loitering outside of their window. Meanwhile, the leader of the women is shown to be a witch, with her real face visible in her make-up mirror.

The morning after, Charlie orders his grandmother breakfast, and is told to go out to the beach or keep himself preoccupied for the day. He wanders around the hotel, eventually bumping into a young boy, Bruno Jenkins, eating a chocolate bar. He finds himself in a room booked for the children's society meeting, but is forced to hide in the room when the group of women, largely believed to be witches, enter the room. The leader of the witches, which Charlie later figures to be the Grand High Witch, gives the witches permission to remove all of their human attributes, revealing their witch attributes. Standing at the front of the room, the Grand High Witch explains that each of the witches will open their own candy store, and will use this as a front to try out their new potion: “mouse maker”. She explains that a drop of the potion will transform a child into a mouse. To illustrate, the Grand High Witch explains that she has laced the chocolate bar given to Bruno Jenkins with the formula; soon, he will be a mouse.

Moments later, Bruno arrives, and all of the witches witness as he transforms into a small brown mouse. Bruno is saved from being squashed by Daisy, but the witches find and capture Charlie moments later and force the serum into his ear, thus turning him into a mouse. The three mice escape the witches grasp with great difficulty, managing to get themselves to the fourth floor where Charlie's grandmother Agatha’s room is situated. The three mice have difficulties when they are seen by the maid, but eventually are able to get themselves into the room and reveal themselves to Agatha. Charlie explains the Grand High Witch turned them into mice, and further explains that if they can get hold of the serum, they can perhaps reverse-engineer it to formulate a cure. The three mice and Agatha create a plan to retrieve the serum whilst the Grand High Witch and the other witches are at dinner.

When the witch has left her room for dinner, Agatha and the three mice go inside their apartment to try and reverse engineer a cure for the mouse maker potion. They’re unsuccessful, however, and the three mice accept that they will be mice forever; Charlie questions if his grandmother will still love and take care of him, to which she agrees. Meanwhile, Daisy remarks that they can still take down the witches, even if they are mice.

The three formulate a plan in which Charlie will slip the remaining amount of mouse maker into the witches' soup before it leaves the kitchen. Agatha warns Charlie that this is dangerous, but he pleads that it must be done to save countless children. In the lobby, Charlie enters the vents while the two other mice are taken to the lobby by Agatha. Whilst there, Bruno asks if Agatha will tell his parents about his current situation, which she obliges.

After Charlie pours the potion into the soup, the three mice and Agatha return to the diner to watch the situation unfold. One by one, each witch begins to transform into a mouse. The Grand High Witch, however, doesn’t drink the soup, instead is distracted by Agatha, whom she now remembers from her childhood. The Grand High Witch is distracted by the witches turning into mice therefore doesn’t realise as Charlie steals her key from her pocket.

Letting themselves into the Grand High Witches’ room, Agatha begins rounding up all of the potions, but is interrupted by the Grand High Witch returning to her room. The witch threatens Agatha, but is unable to go through with her threat as she is turned into a mouse by Charlie moments later. Agatha takes the chest once belonging to the Grand High Witch and finds a book containing the names of each witch. With this, the three mice and Agatha plan to hunt each one down and turn them into mice.

After Bruno’s parents fail to understand and grasp their son’s new life, Bruno decides that it is best to continue living with Daisy, Charlie, and Agatha. The three mice live with Agatha for numerous years later but fail to revert back to their human forms.

The movie was initially slated for a theatrical release internationally on October 9, 2020. The movie was later moved to October 16, 2020, following uncertainty around cinema chains due to the COVID-19 pandemic. The Witches was later pulled from theatrical release entirely due to the pandemic. Instead, the film was released onto HBO Max in the US on October 22, 2020 with the release following in the UK on October 26, 2020.

Differences from other canon

There are several differences between the 2020 adaptation and the original canon material/movie: 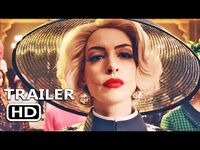