Roald Dahl Wiki
Register
Don't have an account?
Sign In
Advertisement
in: Characters, Actors, Charlie and the Chocolate Factory,
and 2 more

Johnny Depp, born June 9, 1963, is an American actor, producer and musician. He played Willy Wonka in the 2005 film, Charlie and the Chocolate Factory.

Before Tim Burton was involved with the film, Warner Bros. considered many actors for the role of Willy Wonka, such as Ben Stiller, Mike Myers, John Cleese, Patrick Stewart and Will Smith, who all expressed interest in playing the character. However, when Burton became involved, his first choice for Wonka was Johnny Depp. Depp accepted the role without having read the script. Instead, he decided to have a completely different approach to the character than what Gene Wilder did in the 1971 film. 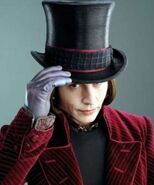