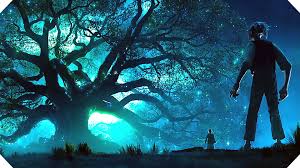 Dream Country is the home of all the dreams in the Universe, and is frequently visited by the BFG when he goes to collect dreams for his collection, so he can give the nice dreams like "WinkSquibblers" and Golden Fizzwiggs" to sleeping children, and locks away any unwanted "TroggleHumpers" or Nightmares.

The original book described Dream country has being completely shrouded in thick grey fog, with the only thing being visible being the grass, which is ashy grey in colour. The BFG uses his ultra-sensitive hearing to listen out for any nearby dreams via the faint humming they emit.

The 1989 animated film portrays Dream Country as another dimension or planet, much like with Giant Country. The sky is dark blue in colour, and is dotted by thousands and thousands of little bright stars and cloud-like wisps. The landscape appears to be crystalline and jumbled. The ground is made up of thousands of interlocking light blue crystal dome-like formations, which has yellow,disk-shaped growths with flat tops, and can easily be stood on. The gravity is also very low, as one can easily levitate several hundred feet in the air if they jump high enough. It is via "The Dream Way", a portal located in a mountain in Giant Country, which is essentially a tunnel of light the connects the two realms together.

The 2016 live-action film shows Dream Country as a subsection of Giant Country, and is located on top of a mountain, hidden by fog. Dream Country itself consists of a mighty "Dream Tree", which sits under a bright starry sky in the middle of a grassy marsh. Dream Country is split into two sections: one with just the Tree under the night sky, and another section that exists parallel to the other. Both areas can be accessed via jumping through a reflective pool of water at the tree's base. The Dreams are also shown to be spawned via lightning bolts being discharged through a perpetual Aurora in the sky, which create Dreams when they strike one of the Dream Tree's leaves. This indicates that dreams are birthed by the very Life-Force of the surrounding elements,

Retrieved from "https://roalddahl.fandom.com/wiki/Dream_Country?oldid=19545"
Community content is available under CC-BY-SA unless otherwise noted.