Roald Dahl Wiki
Register
Don't have an account?
Sign In
Advertisement
in: Movies, Charlie and the Chocolate Factory

Charlie and the Chocolate Factory (film)

$475 million
Charlie and the Chocolate Factory is a 2005 film directed by Tim Burton. It is the second film adaptation of the 1964 British book of the same name by Roald Dahl and stars Johnny Depp as Willy Wonka and Freddie Highmore as Charlie Bucket. The storyline concerns Charlie, a young boy who takes a tour he has won, led by Wonka, through the most magnificent chocolate factory in the world.

Charlie and the Chocolate Factory was released to critical praise and was a box office success, grossing approximately $475 million worldwide.

The Buckets are an impoverished family consisting of a kind and loving boy named Charlie Bucket, his parents and four bedridden grandparents. Charlie's father is employed at a toothpaste factory, responsible for putting the caps on the tubes. The family lives not far from Willy Wonka's giant chocolate factory, which reopened after industrial espionage forced him into seclusion and to make all his employees redundant. Charlie's Grandpa Joe worked for Wonka before the termination.

Wonka announces a contest whereby children that find five Golden Tickets hidden in Wonka bars will be given a tour of the factory with a lifetime supply of chocolate and one a chance to be presented with an unknown grand prize. The skyrocket in Wonka's chocolate sales led to an increase in cavities which also increased toothpaste sales, causing Mr. Bucket to be made redundant when the toothpaste factory replaces him with a machine that places the caps on the tubes.

Four tickets are quickly found: the greedy and gluttonous Augustus Gloop from Düsseldorf, who found the ticket while eating a bar; the spoiled-rotten Veruca Salt from Buckinghamshire, who made her father buy as many Wonka bars as possible; the gum chewing and boastful Violet Beauregarde from Atlanta, who gave up gum and started buying bars after hearing of the tickets; and the arrogant and aggressive Mike Teavee from Denver, who retracked the manufacturing dates and hacked the system.

Charlie hopes to find a ticket but chances are small as money is tight so the best has to be made of is his annual birthday present of one Wonka bar and a bar bought by Grandpa Joe's money, both of which yield no tickets. All hope is crushed when the last ticket is claimed in Russia. Charlie, on finding some money in the street, just intends to enjoy one chocolate bar when news breaks that the last ticket was fake. To Charlie's surprise, the bar he purchased has the real last Golden Ticket. Bystanders attempt to separate him from it, offering him a lot of money, only for the shopkeeper to see that he keeps the ticket and gets back home with it.

When Grandpa Joe sees the ticket, he jumps out of bed and dances with joy. He offers to accompany Charlie on the tour, but Charlie explains how he was offered money for the ticket, and intends to sell it. Grandpa George reminds Charlie that money is far more common than the tickets, and convinces Charlie to keep it. The visitors find Wonka to be peculiar, lonely and acting odd at the mention of "parents". The tour shows how fantastical the factory operates under the efforts of the short humans called Oompa-Loompas.

As Charlie seems to enjoy the tour, the other four children succumb to temptation, and end up being caught in the factory workings and have to be safely recovered by the Oompa-Loompas, albeit in worse shape than at the start of the tour: Augustus falls into a river of chocolate and has been sucked up by a pipe before being rescued from the fudge processing center; Violet expands into an oversized blueberry when she tries an experimental piece of chewing gum despite Wonka's warnings; Veruca is thrown away as a "bad nut" by trained squirrels; and Mike is shrunk down after being the first person transported by Wonka's new television advertising invention. The four leave the factory revealing their deformities; a chocolate-covered Augustus, a much more flexible but still blue Violet, a garbage-covered Veruca and her father, and a taller and paper-thin Mike who was overstretched with the "taffy puller".

During the tour, flashbacks reveal Wonka's troubled childhood; his strict father, Wilbur, a prominent dentist, forbade Wonka from candy consumption of any type or quantity and fitted him torture device-like braces affixed to his teeth. But once Willy managed to sneak a taste, he became hooked to his wish to become a confectioner against his father's wishes, eventually left home to follow and live his dream. He then returned several days later to find his father and home completely gone.

Charlie is congratulated as the only remaining child and Wonka takes him and Grandpa Joe home via the Great Glass Elevator. As soon as they arrive, Wonka is introduced to the Buckets and reveals the grand prize: Charlie is Wonka's heir to the factory and his company. After Wonka reveals on how he created the "Golden Ticket Contest" and that the least rotten child would be the winner, he stipulates that Charlie's family has to stay behind, seeing them as hindrance to progress. To Wonka's dismay, Charlie rejects the offer. Wonka then sadly flies back to the factory in his great glass elevator, leaving a hole in the roof. After Charlie and his father repair the house, the latter is later given a new job at the toothpaste factory as a technician.

Some days later, Wonka's candies are selling poorly and he comes to associate his unhappiness with the financial state of his company, so he makes an effort to find Charlie, whom he stumbles upon when the latter is doing a shoe-shining job. After Charlie discovers Wonka's troubled past, he helps Wonka locate Wilbur. During the visit to Wonka's old household, Charlie discovers Wilbur's display of news articles and other things showing Wonka's achievements and successes as a confectionery businessman, which reveals that the dentist followed his son's success despite his strict prohibition of candy, eventually witnessing the reconciliation between father and son.

Wonka then allows Charlie's family to move into the factory while he and Charlie plan new product lines to produce. He joins the Buckets in a Thanksgiving dinner at their home, which has been relocated into the Chocolate Room. 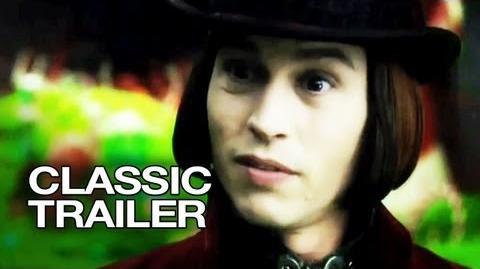 Development for another adaptation of Charlie and the Chocolate Factory, filmed previously as Willy Wonka & the Chocolate Factory, began in 1991, 20 years after the first film version, which resulted in Warner Bros providing the Dahl Estate with to artistic control. Prior to Burton's involvement, directors such as Gary Ross, Rob Minkoff, Martin Scorsese, and Tom Shadyac had been involved, while Warner Bros. either considered or discussed the role of Willy Wonka with Nicholas Cage, Jim Carrey, Michael Keaton, Brad Pitt, Will Smith, and Adam Sandler.

Burton immediately brought regular collaborators Johnny Depp and Danny Elfman aboard. Charlie and the Chocolate Factory represents the first time since The Nightmare Before Christmas that Elfman contributed to the film score using written songs and his vocals. Filming took place from June to December 2004 at Pinewood Studios in the United Kingdom, where Burton avoided using digital effects as much as possible.