Willy Wonka and the Chocolate Factory

To get a golden Ticket (formerly)

Gets sucked up into a pipe and comes out very thin

Augustus Gloop is an extremely greedy child who is obsessed with food and never stops eating. He is the first of five children to win a Golden Ticket.

Augustus is portrayed by Michael Bollner in the 1971 film. In this depiction, he hails from the fictional town of Dusselheim, located in the state of Bavaria in West Germany. Despite eating constantly, the 1971 Augustus has decent table manners, is not as obese as he is in the book, and is polite and friendly to Charlie and the other three finalists. When he falls into the chocolate river while drinking from it, Charlie shows empathy and tries to rescue him by using a giant lollipop (that Mike Teavee hands first to Grandpa Joe) for Augustus to hold and be pulled out, but Augustus is pulled beneath the surface and sucked up the extraction pipe leading to the Fudge Room. His endgame is not shown, with only Wonka's insistence to Charlie that all four bad children would remain intact.

Since Bollner could not speak fluent English at the time of the film's production, the 1971 Augustus has fewer lines and less screen time. However, Bollner seemed to learn his lines rather quickly.

Augustus is portrayed by Philip Wiegratz and isn't nearly as vocal as the other children. His gluttony is greatly emphasized as he is always consuming chocolate, which is sloppily smeared around his mouth. His diet of just chocolate and meat (his overweight father is a butcher like in the first movie) renders him obese with a lumbering, slow walk, and he discovered the Golden Ticket in his Wonka Bar only after accidentally biting off and nearly swallowing one of the ticket's corners. He was aloof and cruel toward Charlie in the one instance when they interact, as Augustus offered him a Wonka Bar as they are walking towards the entrance to the Chocolate Room and then retracts it, telling Charlie he should have brought one of his own. When told by Wonka to "enjoy" the Chocolate Room, Augustus began to gorge himself on the room's various contents before moving on to the chocolate river, ignoring his mother's subsequent protests and Wonka's warning that the liquid chocolate must not be touched by human hands. Augustus soon lost his balance and fell into the river, and was sucked out by the extraction pipe and whizzed off to the "Boiler Room." He was also heavier in this film. While his physical stature was relatively unchanged after his journey into the Boiler Room, he is partially covered in chocolate, which he eats off himself as he leaves the factory, much to his mother's consternation. It is implied through dialogue that Augustus is now made of chocolate.

His hometown of Düsseldorf is briefly seen resembling a southern German town during winter, with wooden houses and a backdrop of snow-capped Alps mountains. However, the real Düsseldorf is actually the capital city of the western German state of North Rhine-Westphalia in the lower Rhine plains, and is also located near the industrialized metropolis of Ruhr Valley.

In the 2005 film's video game, Wonka says at the beginning of the Wriggle Sweets Room level, "Now that Bavarian bully is backing up the entire candy flow!" which is geographically incorrect, though Wonka may not really care. The town shown in the film was actually Gengenbach, in the southern German state of Baden-Württemberg.

In the play "Willy Wonka and the Chocolate Factory," Augustus is a combination of the boys in the book and the 2005 movie, with his song from the 1971 film being used. He is very gluttonous and says little. His mother feeds him massive amounts of food to train him for the "Eating Olympics." According to the song "I Eat More" he gorges himself on such large amounts of food that at the end of the day he is too bloated to fit through the dining room door. His home town is mentioned to be Frankfurt, Germany.

In the novel, after he fell into and was sucked out of the chocolate river, Augustus's body shape is altered dramatically: he became extremely underweight from being squeezed through the pipe.

In the 1971 film, he is not seen again at all after he is sucked into the pipe, as is the case with the other three children.

In the 2005 adaptation, he seemed to be mostly covered in chocolate, although its implied part of him might have become chocolate as evidenced by dialogue.

Augustus' song is sort of an Indian style with the exception of the sitar. It is sung after he gets sucked up into the pipe

Augustus Gloop! Augustus Gloop! The great big greedy nincompoop!
Augustus Gloop! So big and vile. So greedy, foul, and infantile
'Come on!' we cried, 'The time is ripe!'
To send him shooting up the pipe
But don't, dear children, be alarmed;
Augustus Gloop will not be harmed,
Augustus Gloop will not be harmed
Although, of course, we must admit, he will be altered quite a bit.
Slowly, the wheels go round and round, and cogs begin to grind and pound;
We boil him for a minute more,
Until we're absolutely sure
Then out he comes! And now! By grace!
A miracle has taken place!
A miracle has taken place!
This greedy brute, this louse's ear,
Is loved by people everywhere!
For who could hate or bear a grudge
Against a luscious bit of fudge?"

In the West End and Broadway version of Charlie and the Chocolate Factory, Augustus lives in an unnamed town in the German state of Bavaria, and his father remains a butcher. He and Mrs. Gloop are much more cheery and goofy than any of their past incarnations. Augustus found his golden ticket in this version in the same way that he did in the 2005 version- by biting it. Although Augustus isn't really mean to anyone in this version-however he does call Mike Teavee stupid at one point, his gross and greedy nature is what justified his comeuppance. He does such things as burp and fart in public, he smells like meat, and he devours pigs and sometimes dogs (specifically dachshunds). In the song "More of Him to Love," Mrs. Gloop justifies the reason why she spoils Augustus, the main reason being, "There's more of him to love." In both London and Broadway, while in the Chocolate Room, Augustus meets his downfall by drinking out of the chocolate river. Augustus's fate is left ambiguous, in both the London and Broadway version. Although keeping many of the same aspects of his West End Musical Counterpart, Broadway Augustus is actually played by a young adult and his father is implied to be deceased (like Charlie's). 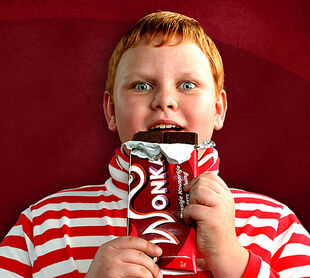 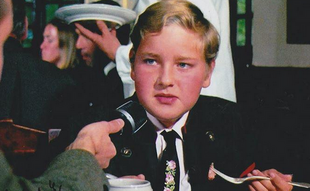 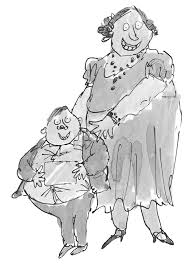 this is the augustus in the book 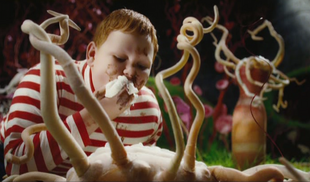