Unknown, but a likely socialite (both films)

Falls down rubbish chute and ends up covered with rubbish (book) 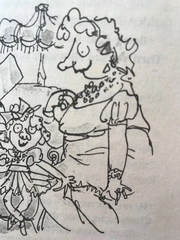 Angina Salt is Veruca's mother and wife of Mr. Salt. Her name is Angina in the novel and Henrietta in the 1971 film. She is the second to go down the rubbish chute in the book. Unlike her husband in the book, Angina is more willing to talk her daughter out of her wishes, but her daughter doesn't care in the slightest. She, her husband, and their daughter leave the factory covered in trash. 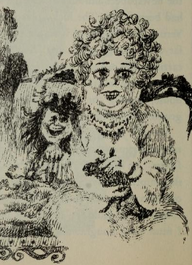 The book states her to be a geography teacher. However, that role is moved to Mrs. Teavee in the 1971 movie and by Norman Teavee in the 2005 movie.